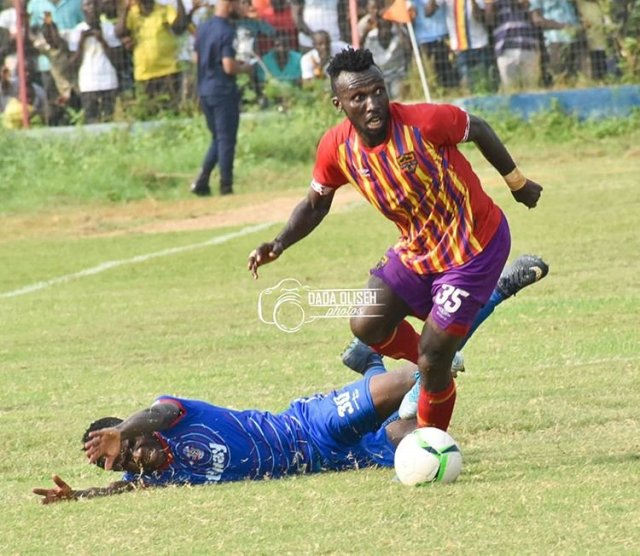 It ended goalless at the Golden City Park after Hearts of Oak held their host Berekum Chelsea to a drawn encounter in an epic week 10 clash of the 2020/21 Ghana Premier League.

Early incursion as Hearts of Oak appealed for a penalty call after Dominic Eshun was brought down in the opposition area but the incident was overlooked by referee Alfa Ba-Adey in the opening minutes of the game.

The host responded quickly after skipper Stephen Amankona’s long range effort went wide off the crossbar to maintain the barren nature of the game.

The Phobians again came so close to scoring but Benjamin Afutu’s brave header missed the poles by inches after 12 minutes of action in Berekum.

The Bibires were awarded a free kick at a very advantageous position on the 22nd minute but Richmond Ayi to the rescue of the visitors- who nearly went down in the game.

Even exchanges from both teams with the host having the upper hand but superb exploits of the Hearts of Oak goalie was the only reason a goal is still yet to be produced in the game.

The Blues with a fine build and calmly plays Emmanuel Clottey through with a fine mirror-pass but shot wide after Richmond Ayi combatively charged at him to deny him from scoring.

It finished goalless after first 45 minutes.

In the second half, Berekum Chelsea once again came really strong and took the game to the Phobians who looked very resolute at the back making sure they concede no goal this time.

The Hearts of Oak attack looked more slower in transition always losing the first balls to the Chelsea defenders always leaving huge pressure on the Hearts midfield and defence.

Just like the first half, Chelsea created series of decent chances but got denied by Richmond Ayi, who has been sensational justifying why he deserve to be the first choice for Hearts in post.

Both teams exhausted all their three substitutions but same old play as nothing seem to change in the style of any of the sides.