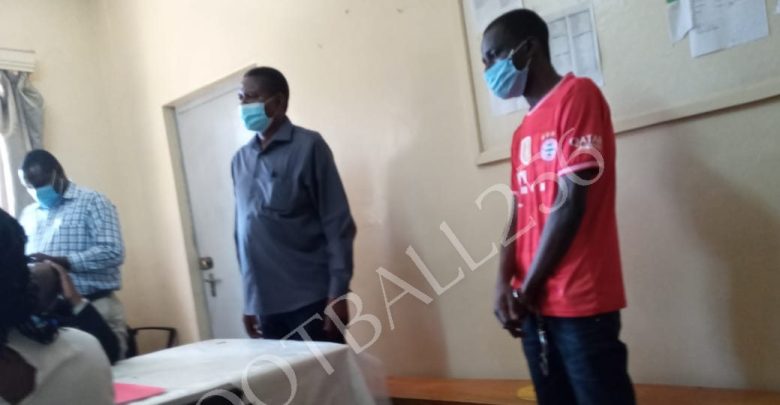 Ugandan football agent Niwagira Ronald Mwine Fred alias Ronnie Santos has been denied court bail and has been remanded to Police custody for the next five days, Football256 has learnt.

Santos was arrested from Museum View Hotel in Kisumu where he was nubbed attempting to influence the results of a Kenya Premier League match between KCB and Western Stima FC scheduled for Sunday at the Nakuru Afraha Stadium.

Santos who spent over 48 hours in police custody since his arrest on Saturday evening in Kisumu was arraigned in the Chief Magistrate’s court on Tuesday morning but did not take plea as the prosecution had not finalised filing their case.

The Directorate of Criminal Investigations (DCI) who have taken over the case then requested for another seven days to conclude investigations into the matter in order to present a fully baked case.

However, court rejected the request but only handed prosecution and the DCI only five days to conclude investigations and present a case in court on Tuesday.

It is at this juncture that Santos’ team of lawyers then asked the court to grant bail to their client, which the court also rejected saying that Santos is considered a flight risk given that he had travelled to the country on an expired passport.

Santos will continue in police custody in Kisumu, where he is said to face fraud corruption and immigration charges with a case opened under case no. OB 65/23/1/2021 (PUI DCI Kisumu Central dealing).

By the time of his arrest on Saturday, Kisumu Police confirmed that Santos was found in possession of Ksh 61,600 in cash.

His passport no K5484752 was also recovered and it was established that his immigration status to Kenya had also expired.

Police say, that they acted on a tip-off from Stima FC chairman Laban Jobita that a certain agent was trying to offer sums of money to his players in order to lose the said game 3-0.

According to a Police statement, Police officers disguised as players and accompanied several players to the hotel where they (players) informed the suspect that they had agreed to fix the match.

The suspect, therefore, gave out Ksh 10000 purportedly being lunch pending payment of USD 5000 upon successfully fixing the game.

Santos is said to have travelled to Kenya early this week and started to have contact with Western Stima players over a match-fixing deal which would see the players receive up to Kshs 600,000 but with an initial down payment of Kshs 70,000.