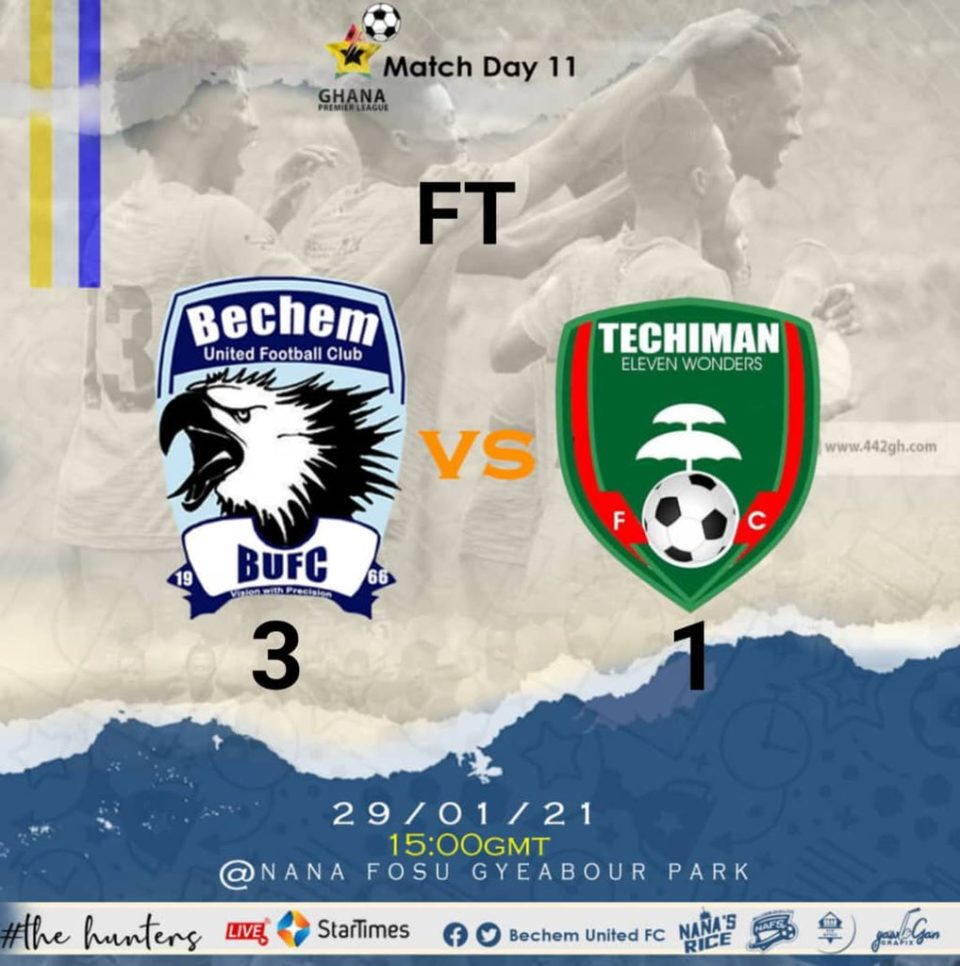 Bechem United have humbled Eleven Wonders by an emphatic 3-1 victory in match-week 11 opener this afternoon at the Nana Fosu Gyeabour Park to claim top spot on the league log.

Despite heading into this tough clash without skipper Moro Salifu, the Hunters exhibited why they should still be considered as contenders for the Championship this year.

The game started with the visitors having the upper hand over their host pressing explosively to break the deadlock.

Thankfully, Ignatius Osei Fosu’s men, finally took the lead on the 17th minute with a fine finish from Samuel Boakye.

The Techiman-based outfit having taken the lead remained very resolute and defended their goal really well to hold the home team in the first department of the game.

Same approach in the second half, Coach Ignatius Osei Fosu ensured his players doesn’t stay high line for long as they always speed back to defend in numbers anytime they looses the ball and that plan worked perfectly in the opening 20 minutes of the half.

Bechem United obviously look to heeding to the advice from the locker room turning things around in the second half having the upper hand on their opponent this time.

Just what they have been hunting for, the home team were handed a penalty on the 75th minute and that was converted neatly by Owusu Boakye Emmanuel to bring his side back on level terms.

The 2016 FA Cup champions kept on with the pressure and that finally yielded them their second of the day through top striker Hafiz Konkoni- to mark his third of the campaign.

Just in the dying minutes of the game, Listowell Amankonah again with his super sub title coming off the bench to make it 3-1 for the Hunters to seal the win, his second time this season.

The win today extends Bechem United to 19 points and currently sit at the top of the table, the second time they have gone to the summit this season.

Bechem United will travel to the Golden City Park to take on Berekum Chelsea in the next round of games whiles Eleven Wonders host Elmina Sharks in Techiman.