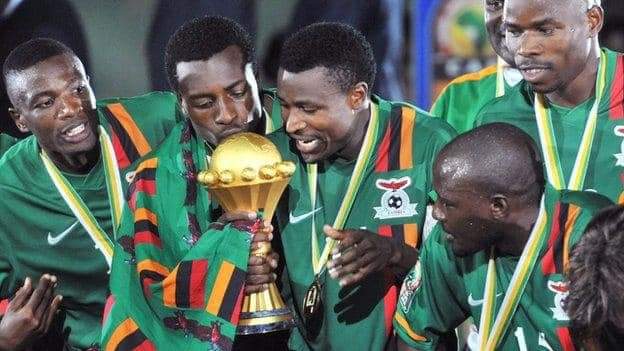 The Football Association of Zambia (FAZ) joins the football family in commemorating the ninth anniversary of Chipolopolo’s triumph at the Africa Cup of Nations (AFCON).

“Today is a special day in our game because of the memory that the AFCON victory brings to many Zambians. It is a goal that inspires all of us to strive to lift our game,” Kamanga says.
“The challenge is upon all of us to pick ourselves up and strive towards returning our Chipolopolo to the summit of the African game. The day we won the AFCON set up another higher challenge which is World Cup qualification.”
“Regrettably since 2012, our fortunes at the AFCON have nosedived with two first-round eliminations and non-qualification. It is something we are working to rectify by strengthening our youth structures.”

Zambia won the Africa Cup of Nations on February 12, 2012, in Gabon, which coincidentally was the city the entire Zambia National Team that perished on April 28, 1993, en route to fulfilling a USA 1994 World Cup fixture in Dakar.

The Chipolopolo beat Ivory Coast 8-7 on post-match penalties to lift the coveted prize. Zambia’s only other continental trophy is the 2017 Under-20 Africa Cup of Nations.