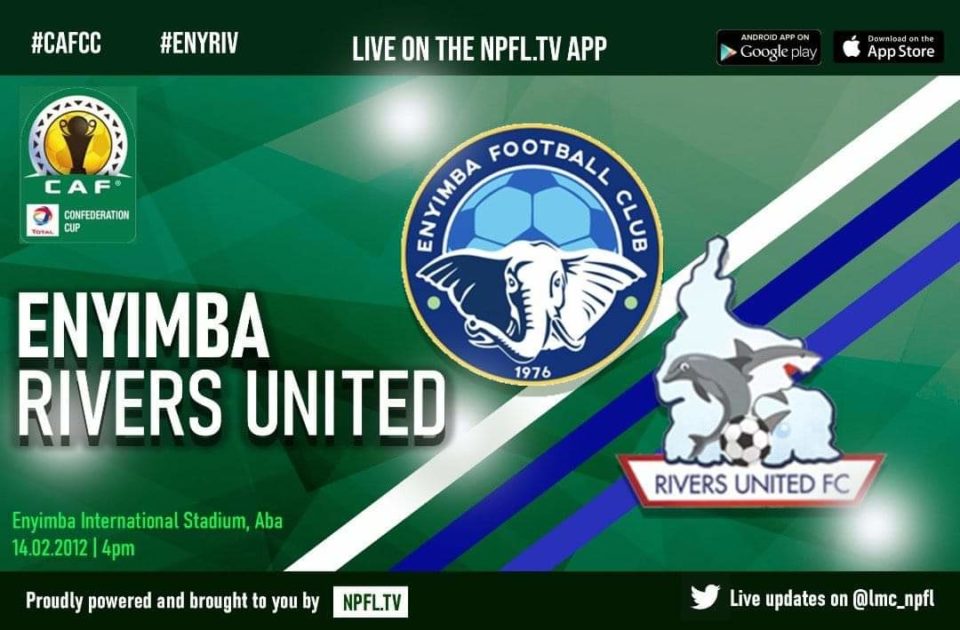 Rivers United are back in Total CAF Confederation Cup action on Sunday as they visit Enyimba FC at the Enyimba Stadium in Aba.

The “Pride of Rivers” will look to continue their impressive form after the 5-0 aggregate score triumph over Bloemfontein Celtic in the last playoff stage and Stanley Eguma’s side have an impressive record on the road this CAF Confederation cup campaign.

As the “NEW Vision Boys” search for another success away from the Adokiye Amiesimaka Stadium, and face one of her historic top-flight rivals in the domestic league, here’s all you need to know…

Kick-off in Aba is scheduled for 16:00 GMT (4pm) on Sunday 14th February.
The match will be beamed live on the NPFL.TV app and NTA.
There will also be robust coverage of this game by the Rivers United media team (that will include videos and photos from the venue) simultaneously via their official Twitter account (@RiversUnitedFC) and official Whatsaap channel from 3:15pm on match day.

For the hosts, all eyes will be on star man Anayo Iwala.

We could see fresh faces in both team’s lineup as players registered after the initial registration window are now eligible to be play.

Head-to-Head
This is the first time both teams will be meeting in a CAF competition.

Who Else is Playing

It’s a full weekend of CAF Confederation Cup action, with plenty of interesting encounters. This is what the schedule looks like…