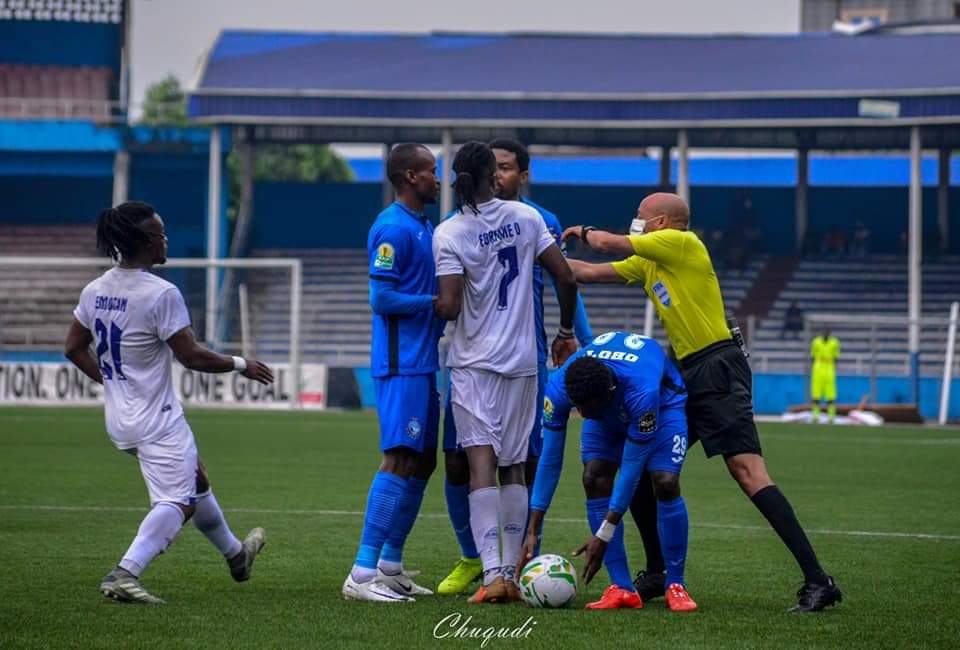 Tosin Omoyele was sent off as Rivers United suffered a 1-0 CAF Confederation Cup defeat to Enyimba in the first leg of their second preliminary round tie, with Cyril Olisema’s strike separating the sides.

Stanley Eguma’s team had a positive start in the first half before the game was temporarily stopped in the 10th minute due to a heart downpour. Play continued after about 25 minutes break as both teams failed to break the deadlock before half.

In the second half, Enyimba FC scored on the stroke of 61 minutes as Cyril Olisema whipped his spot from close range past Theophilus Afelokai with Anayo Iwuala the provider.

Coach Stanley Eguma threw on Nelson Esor, Chika Godwin, Malachi Ohawume and Konan Ruffin from the bench but to little avail and frustrations boiled over when Enyimba Tosin Omoyele was dismissed for punching Ifeanyi Anaemena in the 75th minute.

Rivers United fielded a strong side for the first leg; Oshobe Shuji was in for Desmond Agbekpornu, and there was just three more change from the side that beat Bloemfontein Celtic 3-0 as Theophilus Afelokai continued in goal.

For Enyimba FC, Ogoni born Noble John started in goal. Noble John, in his first spell with Enyimba, and playing against his state club, was very impressive and lasted all ninety minutes.

Rivers United now have a week off before the return leg against Enyimba FC at the Adokiye Amiesimaka Stadium on Sundday, February 21 at 4pm.