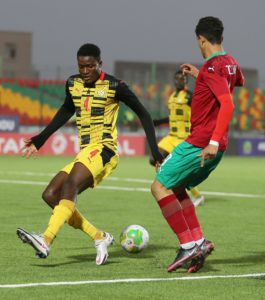 The Black Satellites of Ghana drew goalless with their counterpart of Morocco on Friday evening when the two teams locked horns in the 2021 CAF U-20 Africa Cup of Nations (AFCON) tournament.

In a match played at the Stade Municipal Nouadhibou, both teams played some exciting football in hopes of adding another win to secure early qualification to the knockout stage of the tournament.

Despite enjoying the better of possession in the first half, Ghana, unfortunately, could not create needed goal-scoring opportunities and hence failed to score.

Coming into the second half stronger, the Moroccans caused a lot of trouble for the Satellites and came close to scoring on a few occasions.

With the defense of Ghana standing tall, the match ended goalless with both teams taking a point apiece.

The result sees Ghana staying top of Group C with four points and four goals. Up next for the side, they will go up against Gambia in the final group game.