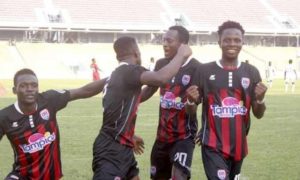 Inter Allies FC have boosted their hopes of survival in the Ghana Premier League after beating WAFA SC 1-0 on matchday 15 of the ongoing 2020/2021 league season.

The Capelli Boys prior to today’s encounter at the Accra Sports Stadium had played seven matches in the division without recording a win.

Going up against a WAFA SC side that plays a similar kind of football, Inter Allies FC set-up strong and made sure they bagged the available points at home.

On the matchday, a Nafiu Sulemana equalizer in the 65th minute of the game handed the home team the narrow win on the back of a goalless draw in the first half.

With today’s win, Inter Allies FC now has 11 points. Although they stay bottom of the Ghana Premier League table, they are just five points away from climbing out of the relegation zone.